Some of you who live in my area may remember Brant Hansen, a U of I grad who was a radio host for a local Christian radio station, WBGL. Brant was also a member of Koinonia Christian Cooperative House at the Baptist Student Foundation, where my sons lived in college. Anyway, he is now in Texas, and has his own radio show on a Christian station down there. As you may see, if you read his post "Can Jesus and Christian Radio Coexist", he is not you average bland CCM guy, and he likes to push the buttons of the Bible Belt establishment.

Someone else is rocking the boat. Check out this article and video about a New England pastor who's efforts to be obedent to the Gospel have raised a firestorm of community anger.

Speaking of anger, Mike Rowe of Discovery Channel's "Dirty Jobs" wonders "is it really about the AIG bonuses??"

"President Bush was, in fact, the first president in history to fund embryonic stem cell research. The compromise Bush reached, however, put restrictions in place that prevented the further destruction of human embryos. It is these restrictions protecting human life that Obama has lifted."

As Lenin said "There are no morals in politics; there is only expedience."
Posted by Joyce at 4:00 AM No comments: 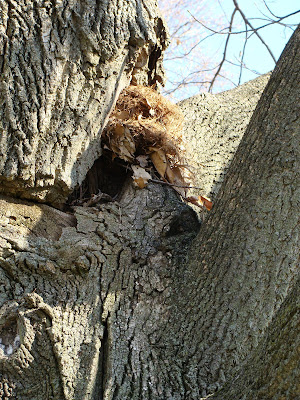 I'm trying to enjoy the spring weather as best I can, and be done with whining about having walking pneumonia, so yesterday I headed outside with my camera. It shouldn't contradict medical orders too much to take photos, should it?

The above picture is of a squirrel's nest in a hollow spot in our tulip poplar. Living as it does just a few feet from our front window, this critter has been endlessly entertaining over the years. I don't know if we see the same one all the time, or if we are seeing a succession of squirrels. I looked online, and found that they live for 7-8 years, so I think we've had this one for a while, which explains it's complete unconcern for us and our (now deceased) cats. I'd love to know if it's male or female! Are there babies up in the tree? Is that the reason for the major housecleaning it is apparently undertaking, judging by all the junk it has tossed out of it's hole? I learned that the nests are called "dreys", and they usually make two or three in the same tree. When one gets too flea-ridden, they change nests for a few weeks. I guess that's one way to deal with a dirty house! 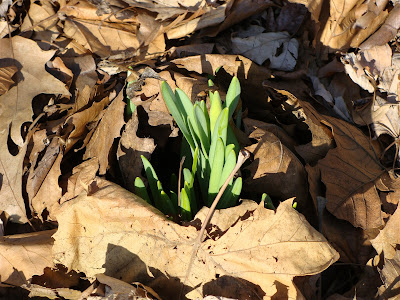 Here are the daffodils, heroically pushing up through the heavy mulch of leaves that should have been removed last week by the gardener. Poor things! But I suppose they have to do this in the wild. 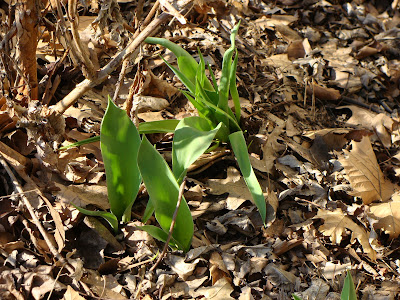 A previous owner of this house planted these tulips, which now come up through the oak-leaf hydrangeas as a spring underplanting. I love it! I couldn't have planned this if I tried. They bloom before the hydrangeas leaf out, giving a nice shot of color to that spot, and then their dying leaves are hidden by the shrubs. I'll try to remember to post a picture of them in bloom. 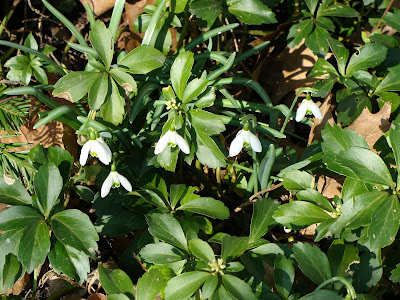 Finally, I've got snow drops blooming all through the Japanese spurge. Again, they will do their thing and then be hidden by the groundcover when blooming is done.
I hope your spring is going well, and you take time to enjoy all the signs of life bursting out around us.
Posted by Joyce at 8:02 AM 4 comments:

I promise I will post something original soon! In fact I have three posts in the works, but haven't finished them just yet.

Still, I thought I would pass on a clip that was sent to me by Babara Hedlund of the little 6-year-old girl, Emily Bear, from Rockford, IL, who will be playing with the C-U Symphony on April 11th. If you can get over to Krannert and buy a ticket, I think you would be delighted by her.

Not Doing Much Walking

Thursday I finally went to the doctor, and was diagnosed with walking pneumonia, which I am re-naming "laying on the couch in sweatpants" pneumonia. I was sent home with over $100 worth of medicine, and I'm trying to follow orders, but everyone says this lasts a month or so. I am not a happy camper right now! Tomorrow, for the first time in the five years I've been the music director, I'm going to miss church due to sickness. Hopefully that will help me get over this sooner so we can go into Holy Week full speed ahead.
Posted by Joyce at 2:13 PM 9 comments:

I'm on my annual unplanned vacation-from-everything-while-battling-bronchitis blog hiatus. Be back soon, I hope!
Posted by Joyce at 5:54 AM 6 comments:

"What we suffer from today is humility in the wrong place. Modesty has moved from the organ of ambition. Modesty has settled upon the organ of conviction, where it was never meant to be. A man was meant to be doubtful about himself, but undoubting about the truth; this has been exactly reversed. Nowadays the part of a man that a man does assert is exactly the part he ought not to assert -- himself."

Here's the News Gazette's Thursday editorial take on our ex-governor:

David McCullough and Doris Kearns Goodwin probably have nothing to fear from the most recently proclaimed political author, Rod Blagojevich. The former Illinois governor, who could be indicted by federal officials any day now, probably will be devoting more time to staying out of prison than writing the great American novel.

And you thought that Rod Blagojevich's only talent was talking about himself.

It turns out that he likes to write about himself too. At least that's the plan. Phoenix Books, a Beverly Hills-based publisher, reportedly has offered the former Illinois governor a "six-figure book deal." And the governor has taken it, promising to complete a book with the working title "The Governor" this year.

"It's the insider's view of not only Chicago politics, but politics in general," said Michael Viner, president of Phoenix Books. "How the horses are traded, the options that are looked at."
Obviously, it won't address a governor's chief responsibility: governing. Blagojevich had little interest in that.

There were some people in high places who didn't want the governor to write this book and worked to try to squash a book deal," Blagojevich's agent, Glenn Selig, told the Chicago Sun-Times.

We have no doubt that a lot of people – in low places, high places and everywhere in between – don't want Blagojevich to write a book. It's not that they fear anything. It's just that they want Blagojevich to go away. But like his pal, Roland Burris, he won't. At least not until after his anticipated federal trial.

The ex-governor better not suffer from writer's block. There likely isn't much time before he'll need to begin planning his defense. In any case, he'd be advised to be a better defendant and a better author than he was a governor.
Posted by Joyce at 4:00 AM 3 comments:

Christopher Cannucciari decided to video his great-grandmother as she cooked some of the meals her family ate during the Great Depression. The results were so interesting, he created a website for others to learn her cheap and simple cooking tricks. This is lots of fun, and you get to meet a wonderful lady to boot.

Yet another way to try to grasp how much we are getting into with the bailouts: "What Does A Trillion Dollars Look Like?"
Posted by Joyce at 9:00 AM No comments:

As I wrote two weeks ago, we've been in the middle of a bathroom remodel. I loaded a picture of the "before" bathroom, and then really couldn't post it; it was just too awful! But I will show you some of the rubble that was hauled out. 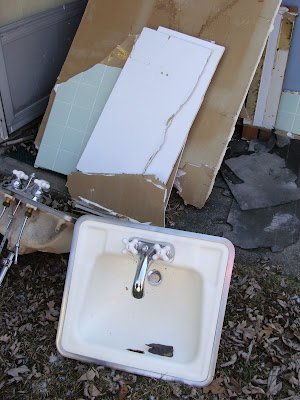 Remodelling, is very difficult to do in a "green" way, though we did the best we could. We reused two mirrors in the new bathroom. We recycled every bit of cardboard, plastic and metal we could. It's truly amazing how much cardboard there was from the packing for the new elements. I purchased low-VOC paint from Home Depot that I was very pleased with, and thankful not to have that intense paint smell in the house during a week when we had to keep the house closed up tight.
Still, a lot of stuff went to the landfill: old ceramic flooring with it's cement sub-floor, some rotted wood sub-flooring (so glad we found that and could get it repaired!), wall tile and sheet rock, and the dilapidated cabinet. A lot of heat energy was lost from the house on those cold days as the remodellers ran in and out to their truck and to the back yard, where they were sawing things.
There are a lot of things I love about the "new" bathroom, but I think my favorite is the Solatube skylight. All day long the bathroom is bathed in warm light, even on the cloudiest days, and it is unnecessary to turn on a light in there at all if the sun is up. 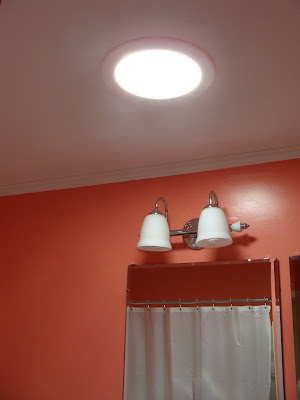 I also am kind of amazed by the new water-saver toilet. We had one from the first generation of water-savers and it... didn't really do the job, if you know what I mean. This one is tremendously better. I did a little rough calculating and I think it should pay for itself in reduced water bills within about 15 months. Toilets are relatively inexpensive. If you can possibly do it, I would encourage you to think about replacing your current one with one of the new ones, for both financial and environmental reasons.
I learned another interesting thing during this process. It is not recommended that a Formica-type laminate counter top be used in a bathroom any more. The glues used to make them have been reformulated to make them safer, and they don't stand up to the warm, steamy environment of a bathroom. That meant I had to look at solid surface counters. I had some crazy luck- there was a pre-drilled granite counter top that was on sale so cheap (and included the sinks) that it cost less than other more plebeian choices. This was a sort of embarrassment of riches!
In the end, we wound up with this: 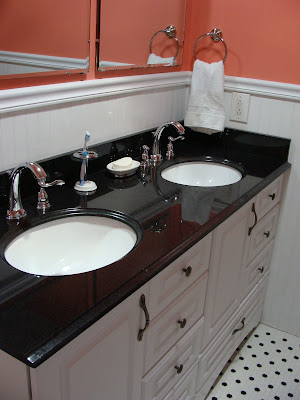 Our daughter, currently the main user of this bathroom, says it looks like it belongs in someone else's house, because it's "so trendy". Of course, ten years from now it will be passe and outdated, but we're not exactly slaves to fashion, so this is probably how it will look until Mike and I can't live in a house with stairs anymore. Fortunately, I'm pretty happy with it.
Posted by Joyce at 10:32 AM 9 comments:

One of my choir members, Hilary S., sent me this over the weekend, and I thought you'd love it as much as I did: